I think the Pixies are one of the world’s most overrated bands, so I didn’t know the song in this iPhone ad I’ve seen in heavy rotation. Twitter buddy hoover_dam recognized it. Here’s how Slate put it:

Yeah, that’s pretty much it. And the singer in this case looks like she’s about 16. I’m not naive about teenagers, but it’s a little disturbing anyway.

I was also told on Twitter that one of the apps in the ad is basically AutoTune for the iPhone. AutoTune. On a Pixies song. On Twitter, I said that’s like using a filter to normalize a face in a Picasso.

Supertramp’s Goodbye Stranger is not a subtle song. The guy isn’t ready to settle down. He’s an early morning lover, and he must be moving on.

But if you go to Songfacts and SongMeanings, you’ll find a few alternate theories, many of them reading too much into the names “Mary” and “Jane.” A couple even find religious meaning.

This one is either utterly insane or brilliant parody:

I agree that the song was written to be about a one-night stand, but in retrospect, it seems to foretell 9/11.

The planes used in the attack were hijacked early in the morning on Sept. 11. The attackers believed they were moving on to an afterlife.

It goes on. The “sweet ladies” are the 72 virgins waiting in paradise, and so on.

Andrew Sullivan rounds up a bit of legitimate right-wing concern about climate change.

The problem is that having conversatives bringing forth their climate-change ideas will confound the media, which can’t handle more than two “sides.” The two “sides” on climate change are currently defined as “please do something about this before the planet goes phhhht” and “this is all just a liberal tax-raising conspiracy.”

This Slate story starts with Common Core, but it’s not really about Common Core (which has a lot of “left-wing” critics as well, mostly because the math in it is some of the dumbest tripe ever cooked up in academia). It goes on to show how many policies were once embraced by the Republicans but then derided when Obama liked them, too.

From Obamacare to basic gun regulations, I’m not sure how many Obama policies you can find that didn’t once have widespread Republican support but are now “OMG! SOCIALISM!”

And the media frankly can’t do enough to point this out. Then they can go into other issues that have limited Obama’s ability to be an effective president — including Obama himself.

Conservative tribalism: Conservatives hate anything Barack Obama and liberals like..

I could be accused of having an overly romantic view of London, England and Britain. Perhaps it’s because I grew up watching Monty Python and Doctor Who, then read all of Bill Bryson’s celebrations of British humility, humor, manners and culture. And my favorite media organizations are the BBC and The Economist, both clear-minded takes on the world as a whole.

It’s not that I fail to see Britain’s faults. It’s a country that respects and even reveres intellectualism, but immigration discussion and even football can bring out some less enlightened points of view. It’s not cheap, though basic supply-and-demand would insist that it couldn’t be. Some newspapers are sensationalist tabloids, and soccer fans have long known to dismiss any rumors that pop up in the media as pure conjecture, if not outright fantasy.

And I have to remind myself that the superb mass transit and pedestrian-friendly streets I love in London are also present in New York and Boston. (National rail, on the other hand, is light years ahead in the UK, and a Londoner who visits Washington must be baffled by the infrequent Metro services.)

Historically, Britain has been ruled by a succession of bloodthirsty monarchs and condescending imperialists. But somehow, it has progressed as a bastion of progress — in science, in literature, in industry and nearly every creative pursuit.

And today, it has a sense of humor about its place in the world. Can you imagine Americans embracing something like the Horrible Histories book series, which goes into gory details about all manner of wrongdoing? The author(s) would have to go into hiding by the time Fox News got a hold of it.

That sense of humor pops up in strange places. The orange juice we Americans would call “pulp free” is presented in the UK as “no bits.” A frequent Underground ad for a cancer-fighting race starts out “Oi, cancer!” and then berates the disease as “less popular than the people whose headphones go bmmt-phhht bmmt-phhht and the muppet who won’t give up his seat to a pregnant lady.” The U.S. equivalent would undoubtedly be something melodramatic or outright depressing.

Sure, political disagreements are there — Scotland has a big vote this year on whether to split from the UK. But I don’t sense the outright hatred of “liberals” through the country. I also didn’t see any bumper stickers of any kind in London — perhaps because many cars were corporate, perhaps because British folks don’t feel the need to express their individualism, perhaps because screaming anti-Conservative or anti-Labour messages at those stuck behind you in traffic just doesn’t seem proper.

And so the overriding feeling I get from a trip to London is that there are people in this world who truly believe in a greater good. People can be free to be individuals, but they’re cognizant of the social contract that binds us together. Perhaps that’s the lesson of going through a couple of devastating wars, or perhaps it’s a greater appreciation of public services from transportation to sanitation. Whatever the case, it gives me a much-needed dose of optimism that I hope will carry me through … sigh … another U.S. election cycle.

Some of the photos below carry through the themes I’ve talked about above. Some don’t. Enjoy. 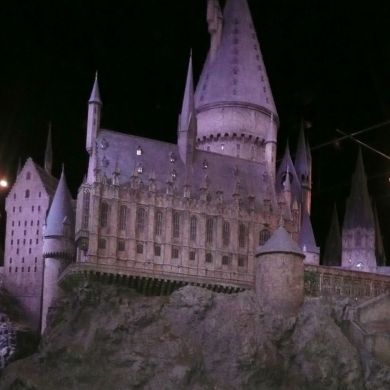 The Harry Potter studio tour has many sights that grab your attention — we start in the Great Hall and move on to see props, a real owl, green-screen demonstrations and more. But my highlight is here — the model of Hogwarts, which takes up most of a large room. Hogwarts is at once familiar and wondrous. If you’ve seen any British television, you’ve probably seen schools like this, with kids adjusting to life away from home. So this is a foothold in the wizarding world, a place in which it’s easy to imagine yourself. 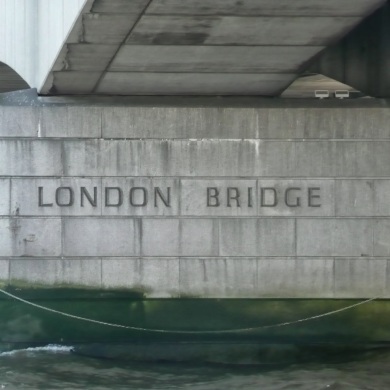 I once saw a special on London sewers that were built as if people would visit on occasion. Here’s another bit of detail. The undersides of the bridges along the Thames are all surprisingly pleasant, as if they were built expecting tourists to take little cruises along the river. 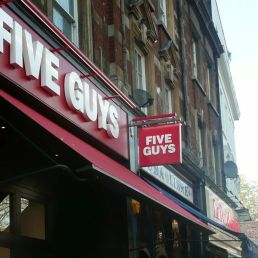 Starbucks, we expected. McDonald’s as well. KFC wasn’t a big surprise. But Five Guys, which we in D.C. still consider a local chain of sorts? It was tempting to visit — the typical London “chip” is a dry, flavorless rectangle. 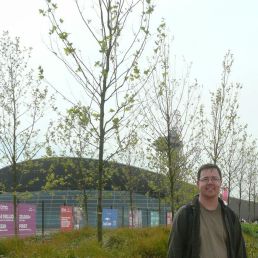 Atlanta, to its credit, maintained its Olympic Park. But I don’t think the actual competition venues are part of the experience. The Queen Elizabeth Olympic Park just opened in early April (2014, in case you’re reading in the future), and it puts the stadium, the swimming venue, the cycling venue and a few other spots at the center of a giant development of housing and shopping. It has a playground with atypical playground gear — a lot of kids just prefer rolling around on the steep slope up to the Olympic rings. 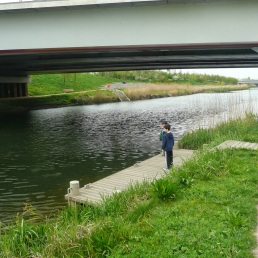 The redevelopment at the Park will take some time. We walked back to the entrance along one of the multiple rivers but found ourselves needing to trudge our way up to cross a busy street. 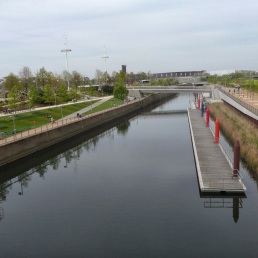 Another river in the park is full of these posts that look like crayons. 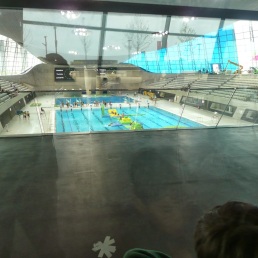 Want to play in the pool where Michael Phelps won a whole bunch of medals? Go right ahead. Whether you’re aware of the history or not, this is a fun place to be. 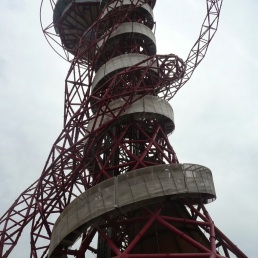 Meet the ArcelorMittal Orbit. If you want to pay a substantial amount of money, you can go up in it and look out over everything imaginable. It’s 376 feet tall, and I haven’t the foggiest idea what to make of it. 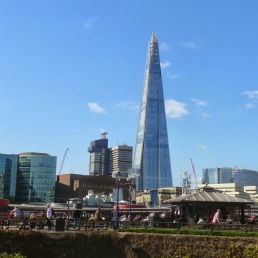 Even taller, of course, is the Shard. That’s 1,004 feet of glass. Standing within the Tower of London moat and looking at the Shard is the opposite of looking at starlight that takes thousands of years to get here — you’ve got one foot in the past, and you’re looking over at the present. 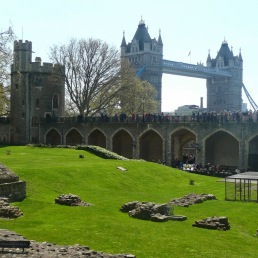 Less jarring — the Tower and its bridge. The Tower is such an incongruous place. It’s a castle — no, wait, a prison! As late as World War II, it held prisoners while bringing in tourists to see the Crown Jewels. It housed the Mint and the Royal Observatory, yet the tours play up the bloodier aspects of executions and torture. Much of it with a sense of humor. 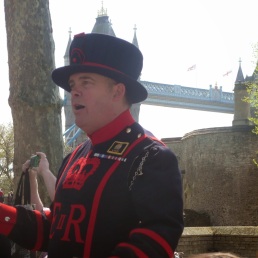 Serve with distinction in the British military and demonstrate a sense of humor, and you can be a Yeoman Warder, living in the Tower and giving tours. Our man was terrific. 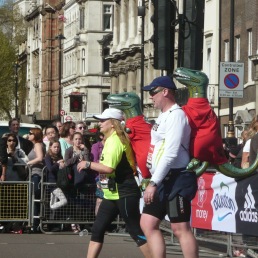 Passing all the historic and modern sights of London — it’s the marathon! And the tail end is what you want to see, full of people dressed up for various charities. 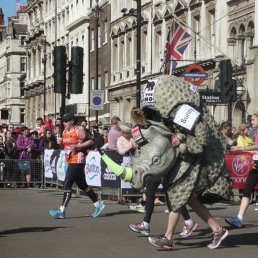 We saw at least three “rhinos” going past. Strength in numbers. 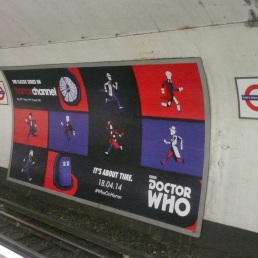 The ads in the Underground are generally pleasant or funny. This one has whimsical caricatures of all the Doctors from the original Doctor Who, now being shown on “Horror” Channel. Perhaps that’s a case of TV channels growing out of their names (A&E delving into reality nonsense, MTV showing little music, etc.) or a case of a delightful sci-fi show being branded “horror” just because it has the occasional monster. This ad certainly doesn’t look like “horror.” It looks like a celebration of British creativity. A worthy celebration indeed.

My writing at Medium