“The last of the Southern belles.”

That’s how Dad described Meg Gunn when he broke the news that he had asked her to marry him after a “whirlwind courtship” (Miss Meg’s words) in 1997. She certainly had the requisite grace and charm — and the accent. At her funeral today, the great Southern storyteller Milton Leathers let on that all the boys of his and her age had a little crush on her at some point.

But we can be more precise than “Southern.” Meg Gunn Dure was from Georgia. G-E-O-R-G-I-A. The Bulldogs. A fridge stocked with “Co-Cola.”

To be even more precise, Athens was her home. It was her town. From the pages of the Banner-Herald to her morning TV show to countless civic groups and social circles, Miss Meg was Athens, through and through.

The great film When Harry Met Sally had a conversation about journalists. Sally, fresh out of college, confesses that nothing has happened to her yet. But she’s going to go to New York and be a journalist.

“So you can write about what happens to other people,” Harry scoffs.

Miss Meg defied that stereotype. She was at the heart of her community, a descendant of a proud Athens family. Like her father, she was a pillar of a great college town.

One legacy of her Athens attachment: The Atlanta Journal-Constitution did a story about her family’s seats at Georgia’s Sanford Stadium. This wasn’t a fancy suite. But it was a perfect view. Soon after she and Dad married, I visited Athens and went to a Georgia game with her daughter, Mackie. We walked by the end zone and asked Mackie how far it was to our section.

Smack in the middle of the stands. Beautiful. And as Meg’s brother Rusty put it, his grandfather had made the perfect choice to get whatever shade could be had in the stadium.

“Once I get seated in the stadium, I can look across the field at the president’s box and see the sun is in his eyes and know that my seats are better than his,” Rusty said.

Miss Meg lost interest in going to games, though. The people around her were no longer Southern gentlemen, sadly. They were drunk and boorish.

“Vulgar,” she would say, just as she said about so much entertainment that assaulted the eyes and ears. Not of any interest to her. 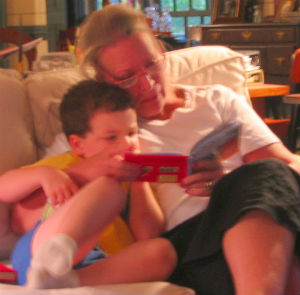 She and Dad were content to watch from home, anyway. From the house Dad designed circa 1990 to her old family home, which they delightfully scooped up when it came on the market a few years ago, they had a living room full of warmth and contentment.

She changed Dad in so many ways, helping him find more to life than coming home from work and being an old curmudgeon up on a hill. But she also adapted herself. She wasted no time becoming a Dure. She fell in love with Sanibel Island, our getaway spot, to the point that she and Dad almost bought a house there. She even hiked up Mount Leconte, a feat noted in her obituary as one of her proudest accomplishments.

The last few years were cruel to her. Dad’s health deteriorated. Soon after he passed away, a tree fell on her house, forcing extensive repairs. Her beloved brother Rusty was diagnosed with cancer that would take him away from us in summer 2015. And she was diagnosed with lung cancer. She managed a few months of good health after the first round of treatment, but it came back all too quickly.

The good news was that she still in good humor. Some people, including Dad, aren’t themselves in their last few months. But Miss Meg was on Facebook three days before she passed away, rejoicing in her wide community of friends and family, sharing her wit and charm with hundreds of people each day.

I didn’t grow up with Miss Meg. She was one of mom’s friends I saw on occasion, and I’d been to the Y with her son, Frank. I had vague memories of her from my childhood, but I didn’t really know her until she was part of the family.

But she was part of my roots. I’ve been thinking a lot about Athens in the past year or so, and driving into town Tuesday hit me like a punch to the gut. It was like traveling through time and knowing that so many people are gone, and it’s not really home any more. Now, for the first time, I don’t have any family there. And I feel like a part of Athens itself has died.

I’m sure she wouldn’t see it that way. She loved Athens the way it was but also the way it is and the way it will be. She leaves behind a community full of people who will love her as long as we live, whether we’re physically in Athens or just thinking about it on occasion.

Besides — now, she and Dad (and Rusty, and her parents) can watch the Bulldogs from even better seats, without any “vulgar” people spoiling the experience.

Enjoy your new view, Miss Meg. And thank you for gracing Athens and the Dure family with your presence.

View all posts by Beau Dure