As usual, he says it better than I ever could, so here he is, in all his NSFW glory from one of his specials on Netflix (I think it was “Talking for Clapping”):

I could not be a more committed progressive, pro-gay, pro-transgender person, but I cannot keep up with the fucking glossary of correct terms, goddammit. I’m trying! I want to help, but holy fuck! It’s like a secret club pass where they change it every week. And then you’re in trouble!

I know I’m an old cis-white motherfucker, but don’t give me shit because I didn’t know the right term! RuPaul got into shit for saying ‘tranny.’ RU FUCKING PAUL! RuPaul, who laid down on the barbed wire of discrimination throughout the 70s and 80s so this generation could run across her back and yell at her for saying ‘tranny’! What the fuck?! I will always change. I will always try to learn the new terms. But you’ve gotta give me some wiggle room.

He goes on to point out that the world is full of slick, evil people who know the right words, while some of the uncouth folks who aren’t up with the latest academic trends are actually the tolerant ones.

It’s brilliant. Check it out.

When I was at Duke, we had a Divinity School professor named Stanley Hauerwas who was legendary for his iconoclastic theology and his profanity. (He only recently retired.)

One day, The Chronicle wrote something about his most recent controversy. I had nothing to do with it — didn’t write it, didn’t edit it — but I had the misfortune of answering the phone.

“This is Stanley Hauerwas. Please tell (writer name) that he’s an irresponsible asshole.”

I responded with some pearl-clutching comment about speaking in a civil manner. The older, more worldly wise me would say, “right … asshole. How do you spell that?”

So Duke Divinity has always been a fairly lively place.

This is, of course, news to The New York Times, which has always viewed Duke as some sort of odd anthropology experiment intended to show what happens when you plant an academically ambitious school in the South and give it an athletics department that occasionally wins national championships in basketball, lacrosse and golf. A sample headline: “A New Battleground Over Political Correctness: Duke Divinity School.”

That’s not from 1990. That’s from this week. (And yes, it’s quite amusing that the NYT had to correct not just the name of Duke’s spokesman but also its photo caption, which identified a small Divinity School building as the towering Duke Chapel.)

You’d think we would’ve dropped “political correctness” from the lexicon by now. Certainly it should no longer be seen as the exclusive domain of the ill-defined “left” in this country. Over the past couple of decades, the right wing has attempted to bully anti-war speech (see Coulter, Ann, best-selling books written by), and its elected officials are actively trying to silence all manner of academia, from slashing the humanities to scrubbing the Web of climate-change research. Anyone who has voted GOP in the past 20 years has no business lecturing others about the free exchange of ideas.

And in this case, the aggrieved professor (Paul Griffiths) would meet most definitions of “left.” Gay rights? Check. Police reform and racial justice? Check.

No, this is simply a case in which “being woke” has overridden “being logical.”

Literally. “Ad hominem” is a concept we learn in logic class, and the Divinity School dean doesn’t seem to understand it — unless she’s referring to emails other than the one to which she responded.

Here’s the exchange: A Divinity faculty member sent an email urging colleagues to attend a two-day conference on racism. Griffiths was unimpressed:

I exhort you not to attend this training. Don’t lay waste your time by doing so. It’ll be, I predict with confidence, intellectually flaccid: there’ll be bromides, cliches and amen-corner rah-rahs in plenty. When (if) it gets beyond that, its illiberal roots and totalitarian tendencies will show.

(You know, that’s not bad writing. Aside from the colon, which the far-right Duke Review of my day would’ve noted with a (sic) because they wanted their harrumphing to come across on the printed page. Well, to be fair, the Duke Review surely would’ve agreed with the good professor here, so they would spare the sic. I’ve intentionally added some bad grammar in this paragraph in case the Duke Review still exists and wants to quote me. Hi guys! Hope you open your minds a little before you graduate!)

So the dean, Elaine Heath, responded as such:

It is inappropriate and unprofessional to use mass emails to make disparaging statements – including arguments ad hominem – in order to humiliate or undermine individual colleagues or groups of colleagues with whom we disagree. The use of mass emails to express racism, sexism and other forms of bigotry is offensive and unacceptable, especially in a Christian institution.

Wait a minute. Ad hominem? Racism, sexism and other forms of bigotry? Where? Not in the excerpt the NYT printed.

How about the whole exchange? The American Conservative, which is several levels more reasonable than the old Duke Review ever was, has what appears to be all the relevant emails.

The only reasonable email of the bunch is from Thomas Pfau, an English professor with an apparent connection to the Divinity faculty. He concedes that Griffiths expressed himself in “harsh terms,” but he properly parses the language therein:

As I read Paul Griffiths’ note, I took him to demur not at the goal that the proposed training is meant to advance, viz., to ensure practices free of bias and mindful of equity. Rather, he challenges the assumption that, merely for the asking, faculty ought be to give up significant chunks of time for the purposes of undergoing “training” in these areas.

Unfortunately, Griffiths concedes the high ground with a follow-up email that rants about his colleagues by name. Now that is ad hominem.

But he also raises an objection that calls the dean’s behavior into serious question. He alleges that they had agreed to meet about the email exchange with two other people present — Pfau and a “Dean of Faculty.” Seems reasonable. Then Heath canceled the meeting and revised the terms to exclude Pfau, which does not seem reasonable. Why exclude the only grown-up from the room?

And “grown-up” is the operative word here. You can say this is about “political correctness” or “left” or whatever. But it’s really about people refusing to take real responsibility for their actions.

Put more simply: It’s stubbornness. It’s the same stubbornness that makes people double down on climate-change ignorance or being the full-time Woke Police. (The opposite of Cheap Trick’s Dream Police?)

It wouldn’t have killed Griffiths to go to that training, as a Facebook friend points out. Nor would it have affected him if he had simply skipped it and then had civil but honest discussions with people after the fact. He didn’t cover himself with glory here, and it’s a pity that he has wound up the victim, retiring/resigning after the next academic year.

And Heath has no business saying Griffiths has “refused” to meet with her without a grown-up in the room. Handing down Commandments is Old Testament. Good Divinity faculty may be aware that there’s this New Testament with someone named Jesus who called all sinners to draw near. I can’t recall Jesus going to heal the sick but first demanding that someone who wasn’t sufficiently woke must leave the room.

Is Duke Divinity riddled with racists? I doubt it. A Duke Divinity grad’s piece at Patheos says hostility toward diversity training “does not seem to be the prevailing opinion within Duke Divinity School.”

Indeed, the prevailing opinion seems to be that each faculty member thinks so highly of himself or herself that he/she has the exclusive right to lecture the others on his/her own terms.

And that is indeed illiberal, un-Christian and whatever else you want to call it.

I need to come up with a new name or new tag for this series. Maybe “grad-school bullshit”?

In any case, I coincidentally followed up some reading on the philosophy / transracial / transgender / dogpile-on-someone-not-perceived-as-woke story that has gone viral now that it has reached New York magazine with a piece that offers up this gem:

Reflecting on what he called “the woke identity,” Freddie DeBoer observed a tendency among some leftists to forcefully reject the work of persuasion with excuses like, “It’s not my job to educate you.” The not-yet-woke are to be chided, not engaged.

“The problem with making your political program the assembly of a moral aristocracy is that hierarchy always requires exclusivity,” DeBoer argues. “A fundamental, structural impediment to liberal political victory is that their preferred kind of moral engagement necessarily limits the number of adherents they can win. It’s just math: you can’t grow a mass party when the daily operation of your movement involves finding more and more heretics to ostracize from the community.”

Source: Seven Reasons the Left Is Losing – The Atlantic

This is exactly what I’ve experienced several times in the past six months, all from people who generally share the same concerns I do but are so busy looking for a wrong-doer (pardon the pun on my last name — and yes, that’s how you pronounce it) to flog that they’ve piled on me for raising the simplest questions or trying to look at the big picture.

I don’t have much to add … yet. I’m thinking of pitching a piece about how the academic left is suffocating the political left.

But I’d like some input. I’m planning to seek it out, but you’re welcome to leave some here, too. Or email me. Or reach me on social media. Or just yell at me. Whichever. I’m listening. (To most of you, anyway.)

Some may think this is a diversion from the daily Trump / North Korea / crisis du jour coverage. I think we can handle more than one story at a time, and this is a fascinating story that straddles the line between disorganization and outright fraud. The lessons we can learn from this might be just as valuable as figuring out why Obama voters who voted for Trump think the Democrats are the party of the 1%.

(OK, so maybe we just need something else to think about before our brains explode.)

In no particular order:

1. Did any of the models and “influencers” who were planning to go actually turn up in the Bahamas? I saw that some of them may have been warned not to go, but did they somehow manage to contact all the VIPs and tell them to stay home, even as they were trying to accommodate the rich-but-not-famous people who did make the trip?

3. Who thought it would be a good idea, upon having a bunch of people arriving to an island with insufficient food and shelter on hand, to just have them all spend the afternoon drinking? At that point, who was making decisions?

4. Why is so much of the social media furor being reported all coming from one guy’s Twitter feed?

5. Did they have an operational concert venue? We’ve seen some pictures of a stage with lights.

The reporting on this has been, quite frankly, lazy. This is a great story, combining celebrity gossip with the real issue of how the hell this disaster happened. We can laugh about the poor suckers who went to this thing, but they got ripped off.

This is a worthwhile investigation. Who’s up for it?

Update: A lawsuit filed against the Fyre folks adds little except more allegations that performers and others were warned not to show up. If true, that’s quite shocking — you know you’re not going to be able to pull this off, but you let people fly from Miami to the Bahamas anyway??!!

“Beau” has passed “Bo” in popularity as a male name, according to Social Security records: 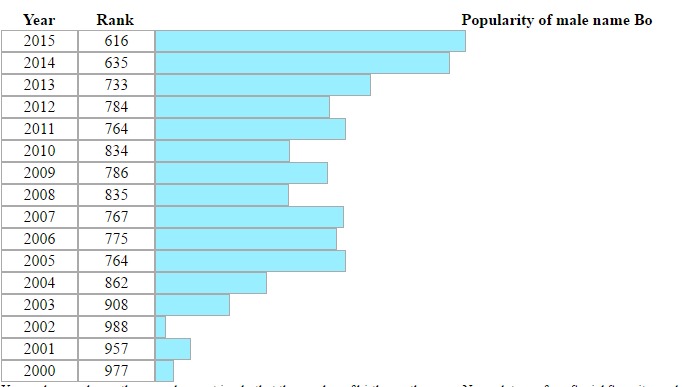 My writing at Medium